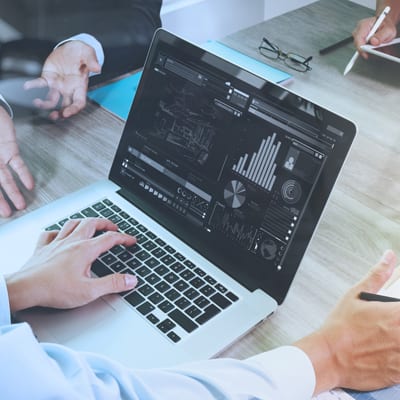 Amid the aftermath of troubling cybersecurity breaches at various government agencies—including the Office of Personnel Management—the U.S. government and Congress have pushed for a major increase in government focus and spending on cyber protection.

To assess and strengthen federal networks and systems, the White House Office of Management and Budget (OMB) launched the Cybersecurity Strategy Implementation Plan (CSIP) in October 2015.

The influx of government focus and spending on cybersecurity generates immense opportunity for commercial information technology companies to increase their revenue by contracting with the government or working with existing prime contractors to provide cyber services.

Most notably, the Department of Homeland Security’s (DHS) $1 billion award to Raytheon at the end of last year marks one of the largest civilian cybersecurity orders in recent history. The contract, which will reportedly run for five to seven years, includes the development and support of cybersecurity protections for the DHS and its umbrella agencies.

Increasingly prevalent cyber threats are squeezing private businesses and federal entities alike. Last year, the government revealed that hackers stole sensitive information from upwards of 21 million people—including every person given a government background check during the past 15 years—through a massive breach of government computer systems. A separate breach earlier in the year compromised the personal records of 4.2 million federal employees. Both attacks are believed to have originated from China.

As the government increases scrutiny and tightens regulations, its own data infrastructure is growing. The recently passed Cybersecurity Information Sharing Act (CISA), a historic bill designed to foster collaboration and sharing of cyber threat information between private industry, government and law enforcement, has implications for technology companies as well as federal entities. While the bill intends for a two-way flow of information, it has garnered attention for potential privacy risks to personal data if the government collects information on a cyber attack. The federal government faces a heightened need to protect not only its own data against attack, but also companies’ data and, potentially, consumers’ data, which might be collected as a result of this and other cyber-related legislation. The recent data encryption debate between Apple and the FBI illustrates the potential sensitivities that may arise.

There are a number of pathways that may allow companies to take advantage of the pipeline of emerging opportunities and participate as prime or subcontractors in targeted efforts to upgrade systems and protect various agencies’ information infrastructure. In his fiscal 2017 budget proposal to Congress, President Obama included a $19 billion cybersecurity request—which, if passed, would constitute a 35 percent increase in cyber spending over this year. The initiative calls for $3.1 billion for technology modernization at various federal agencies and $62 million to expand efforts to retain qualified cyber professionals.

From a defense perspective, the National Defense Acquisition Act (NDAA) for fiscal year 2016, signed into law last November, could also revolutionize cyber acquisition and expand opportunity for contractors by allowing U.S. Cyber Command the authority to acquire cyber tools it deems necessary to its mission. The NDAA also specifies that, in the event of a cyber attack, the Defense Secretary can appoint an official charged with awarding contracts to acquire supplies and services to mitigate an attack’s effects, ideally within 15 days. 4 Additionally, cleared defense contractors and ”operationally critical” contractors have been provided with cybersecurity liability protections, provided the contractor is in compliance with the DOD’s cyber requirements.

Commercial companies looking to enter the government contracting space must be prepared to protect highly sensitive information and implement the necessary security controls to satisfy the government’s strict requirements. On Dec. 30, 2015, the Department of Defense (DOD) gave contractors an extension on implementing the new rules for network penetrating reporting and contracting for cloud services until Dec. 31, 2017. While DOD has granted additional time for contractors to assess their information systems and address any security gaps, it is critical to identify those gaps now to avoid a breach of contract or false implied certification determination.

In addition, the recently passed 2016 NDAA contains several cybersecurity provisions that have compliance implications. The aforementioned liability protections do not extend to contractors who engage in “willful misconduct,” which includes “disregard of a known or obvious risk that is so great as to make it highly probable that the harm will outweigh the benefit.” The NDAA also requires defense contractors to report network penetrations within 72 hours.

What do these new rules mean for government contractors? To take advantage of the opportunity to contract with the government to strengthen its systems and bolster its cybersecurity protections, commercial companies must, at a bare minimum, comply with the government’s prescriptive recommendations for cybersecurity, and employ best practices to keep sensitive data out of the wrong hands. To do so, contractors should:

Organizations can be certain that cybersecurity will remain a top priority for both private industry and the federal government. Businesses in the cyber realm are operating in a rapidly shifting landscape characterized by both challenges and opportunities. Preventing and addressing cyber threats is a moving goalpost for both businesses and government agencies. The right mix of proactive risk reduction and testing combined with maintenance of internal controls can go a long way for businesses looking to tap into the full pipeline of cyber-related contracting opportunity.

Bob Craig is a Risk Advisory Services managing director and may be reached at rcraig@bdo.com.

Shahryar Shaghaghi leads the firm’s Technology Advisory practice and may be reached at sshaghaghi@bdo.com.