Home > Knowledge & Insights > Newsletters > The Emergence of 5G Wireless Communications: Why You Should Be Concerned 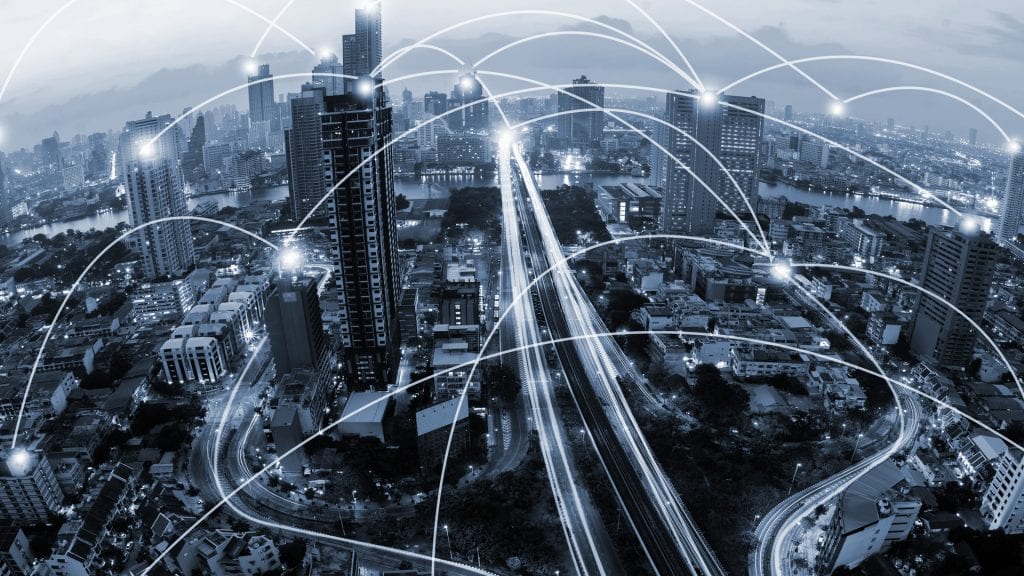 This article was featured in The Legal Intelligencer and on Law.com.

Devices and Data in Leaps and Bounds

The 1980s witnessed the world’s entry into data movement, as defined by generational wireless infrastructure. This first generation, or 1G, was the backbone that powered the brick-sized, hand-held, mobile devices with extending antennas, bag phones and the ever-impressive center console phone units featured in new cars.

The 1990s ushered in 2G (second generation) wireless infrastructure. We saw the first-ever flip-phone, which was substantially smaller and lighter than the previous generation’s devices. Capabilities expanded to include digital encryption of conversations, as well as improved radio frequency, enabling more users to leverage the technology.

In 2010, 4G (fourth generation) wireless infrastructure became available. It continues to provide more bandwidth and greater speeds for everyday mobile-device operations, such as messaging, video-calling, TV streaming and data transfer. To use it, 4G requires devices that are engineered to take advantage of its protocol. In general, 4G provides 10 megabytes per second for mobility communication in real world settings. It’s important to note it has a latency (travel delay) of 120ms (milliseconds), which impacts all aspects of data transfer.

As we enter 2020, we see 5G (fifth generation) becoming more available. 5G will provide speeds of one gigabyte per second—100 times faster than current 4G performance. To help you visualize this, picture the 4G wireless infrastructure as a garden hose; in comparison, 5G would be the Holland Tunnel. Information will travel faster than ever before. Super-connections will power autonomous cars, smart communities, industrial IoT (Internet of Things), as well as immersive education. The medical community will experience advancements only seen in sci-fi movies. A surgeon in New York could perform a complex surgery on a solider in a combat zone field tent across the world, all over a wireless infrastructure, leveraging robotics. Part of what makes this possible isn’t just the enormous increase in transfer speeds, but also the reduction in latency. As mentioned above, 4G carries a latency of 120ms; 5G will reduce latency to 1ms (virtually no disruption), which we’d all agree is important with a robotic arm inside of us.

Technical advancements have evolved through a decade-change-over graduation. The speed transfer represents only the highway on which we travel with or leverage the varied technologies that are developed. We’ve seen a greater rate of advancement in those technologies every decade. Assuming you’re old enough, if you took yourself from 20 years ago and dropped yourself into today, you’d hardly recognize what’s happening. Devices we hold in our hands have replaced or eliminated products, functionality and even industries—cameras, video camcorders, global positioning systems (GPS), digital recorders, landline phones, answering and fax machines, scanners, alarm clocks, calculators and TVs. Apps are being developed (perpetually) that address nearly every aspect of life management.

5G will fuel the next level of advancement unlike anything we’ve ever seen before. Organizations like Tesla have been developing autonomous cars (already logging over 2 billion miles) that will leverage 5G transfer speeds, allowing vehicles to report back on hundreds of thousands of real-time critical data-points as the car is rolling down the road. It’s been forecasted that within the next 10 years, most cars could be self-driving; making a human-navigated vehicle a thing of the past.

Flanking 5G is the evolution of artificial intelligence (AI) and recent breakthroughs in quantum computing. AI is already here; machine learning happens every day within our personal lives, as we use our digital assistants (Siri, Alexa, Nest, etc.). Each time we ask these devices something, the information is recorded and archived to our personal digital footprint. There is an ever-expanding Big-Data capture that has been happening for years. However, now that 5G is becoming available, this learning will escalate to new levels.

The smartest classical computer (binary–1/0 bits) in the world today is a system known as Summit, developed by IBM. It’s capable of 200 petaFLOPS (floating point operations per second). Google has successfully developed (what most consider to be) the first quantum computer (known as Sycamore), operating at 53 qubits (basic unit of quantum information—the quantum version of the classical binary bit). This engineering allows for the phenomena of superposition (1s and 0s occupying the same space). This article will not attempt to further explain this architecture; suffice to say, it’s fast. A recent test proposed the most complex problem ever created to both the Summit and Sycamore computers. Google’s Sycamore solved it in 200 seconds; the IBM Summit computer could not solve it. In fact, it was calculated that it would take Summit more than 10,000 years to complete.

The Effects on Consumers and Companies

What does all this mean to our everyday 2020 lives? Well, for starters, where there’s productivity advancement, there’s an equal if not greater advancement in nefarious activity. Threat actors are already using advanced technologies to compromise encryption and orchestrate complex criminal schemes. Strong encryption remains the gold standard, but as technology moves forward, so will the world of the Dark Web and those that attempt to profit from cybercrime.

Compliance and regulatory laws are rapidly changing. Many industries and verticals are now required to maintain (at a minimum) annual risk assessments that provide a detailed blueprint of existing cyber-threat management protocols as well as penetration tests, reflecting scenario-driven outcomes. The forensic analytics required to identify where, how and when a compromise took place, requires an advanced understanding of not only an organization’s technology infrastructure, but also their overall operational-data exchange. Said another way, along with the many fascinating aspects of 5G comes a myriad of new issues to prepare for and face.

In today’s inter-connected world, cybercrime typically consists of network breaches, ransomware and distributed denial-of-service attacks. These can be expanded to include other criminal activities perpetrated using computers, such as identify theft, human trafficking, and fraud. As the economy becomes even more global and connected in the 5G era, these crimes will continue to rise at alarming rates. Not surprisingly, investigations into cybercrimes involve extensive digital evidence, and require obtaining and accessing numerous devices, social media accounts, and cloud-based storage options containing voluminous and disparate data sets. Mobile devices like smartphones often contain critical data, such as pictures and videos, as well as information that establishes connections between victims, perpetrators and co-conspirators. In some cases, mobile devices can be used to physically place potential suspects at the scenes of crimes using GPS, Wi-Fi and mobile networks to estimate their locations at a specifc date and time. The quality and usefulness of digital evidence varies, so forensic enhancement may become necessary in order to effectively advance cybercrime investigations. As 5G technology evolves, so will the obstacles in the way of digital data specialists tasked with processing this highly probative investigative evidence.

Technology-enabled crimes like identify theft seem to concern the public much more these days than conventional criminal activity. Identity theft takes place when a fraudster steals victims’ Personally identifiable information (PII) in order to open accounts in their names or assume control of their existing accounts. Identity theft victims may never recover financial losses and might be negatively impacted in other ways, especially in job applications. Many people also suffer emotionally as a result of being victimized, and the numbers will continue to increase in the 5G environment.

The most substantial monetary losses associated with today’s cybercrimes appear to result from business email compromises (BEC), which are schemes targeting organizations that wire payments in the ordinary course of business. A BEC is perpetrated by compromising legitimate email accounts through sophisticated computer intrusion or social engineering techniques for the purpose of enticing an otherwise unsuspecting person to transfer funds without authorization. Although a BEC typically results in significant economic harm to the victim organization, far fewer reports of BEC incidents surface as compared to identify theft complaints.

Preventing Fraud and Threats in the 5G Era

When it comes to fraud, real-time detection and prevention is certainly preferred over post-event reconciliation, but at 5G scale and speed, that is easier said than done. The increase in the number of connected devices will lead to a dramatic increase in data volume and velocity that, in and of itself, will make it more difficult to identify and prevent scams. In the 5G environment, traditional fraud prevention techniques will not be viable anymore.

Cybercrime schemes and techniques will evolve and be more difficult to investigate and prosecute, especially given the emergence of 5G wireless technology. In response, organizational leaders do not have to be savvy technology experts, but they should have a basic understanding of the cyber threats that could affect their businesses and people. Addressing these problems will take time, talent and money, and new capabilities and resources can’t be developed overnight. However, leaders should invest in the necessary training and resources to foster an organizational culture of accountability and one that equips employees to mount a defense against cyber threats of today and tomorrow. Every employee plays a role in maintaining the integrity and security of their organization’s systems and data. Cybersecurity must be a perpetual and collaborative effort between leaders, employees and law enforcement professionals, especially as 5G powers the next wave of technological advances, which criminals undoubtedly are planning to exploit.

“Reprinted with permission from the January 21, 2020 issue of The Legal Intelligencer. © 2020 ALM Media Properties, LLC. Further duplication without permission is prohibited.  All rights reserved.”